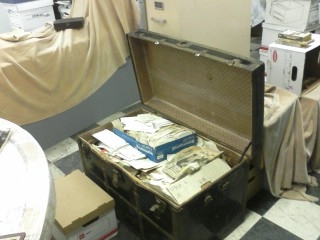 The frosh reading list
The Man from the Cave by Colin Fletcher:  Alfred A. Knopf, New York, 1982
This story of an unusual American life rescued from anonymity through the casual discovery of a few mysterious objects in an old steamer trunk is a wonderful telling of the thrill of discovery in intellectual pursuit.  This should be the most accessible book on this list for the young reader.
A Modern Archives Reader:  Basic Readings on Archival Theory and Practice:  edited by Maygene F. Daniels and Timothy Welch:  National Archives and Records Service, Washington, D.C., 1984
Restoring Order: The Ecole des Chartes and the Organization of Archives and Libraries in France, 1820-1870 by Lara Jennifer Moore:  Litwin Books, LLC, Duluth, 2008
“According to most histories of French archives and libraries, the nineteenth century was a period of slow but steady recovery from the trauma of the revolutionary era. In contrast, Moore argues that the organization of archives and libraries in nineteenth-century France was neither steady nor progressive. By following the development of the Ecole des Chartes, the state school for archivists and librarians, Moore shows that conceptions of "order" changed dramatically from one decade to the next. More important, she argues that these changing notions of "order" were directly connected to contemporary shifts in state politics. Since each new political regime had its own conceptions of both national history and public knowledge, each one worked to "restore order" in a different way.”, --- Amazon.com, 2011
"The French Revolution and the Materiality of the Modern Archive" by Ralph Kingston:  Libraries and the Cultural Record 46 No. 1, Austin, 2011
“Historians of vandalism and conservation during the French Revolution have treated the archive as an idea, an expression of modern political culture, and have largely ignored its material history. When revolutionaries "attacked" Old Regime depots, however, they were spurred on by necessity: locating valuable property titles, or paper for use as gunpowder funnels. Moreover, it was only when limited space in ministry buildings forced New Regime administrators to discard documents from their own holdings that archivists embraced historical conservation. Through ministerial deposits in the Archives nationales, the archive as a lieu de mémoire—legitimized by a respect des fonds—took shape in nineteenth-century France.”, --- University of Texas, 2011
That Noble Dream:  The “Objectivity Question” and the American Historical Profession by Peter Novick, Cambridge University Press

High is beginning to plan for a first appearance at the Archives Bazaar. 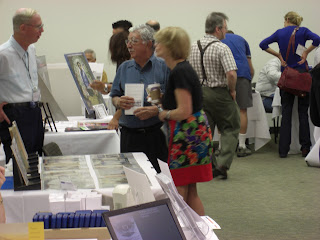 The Avery Clayton award!
Posted by Neil Bethke at 12:25 PM No comments: